At the 2017 Institute of Surveyors NSW awards Night Kennedy Surveying were awarded a “High Commendation” for the involvement with the installation of a shark barrier at Lennox Head Seven Mile Beach. Under council directions Kennedy Surveying were tasked with coordinating the aerial installation of a shark safety barrier to protect public swimmers and bathers. 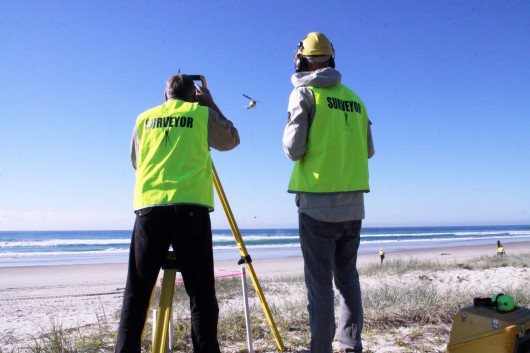 In 2016 Kennedy Surveying were the State’s stand out surveyors winning two categories and securing the Thomas Mitchell Award for the second time.

Winning the Sir Thomas Mitchell Award is a prestigious achievement and securing this award twice has proven Kennedy Surveying’s ability to maintain it’s professionalism and ability to outperform the industry standard.

At the yearly ‘Institute of Surveyors NSW Awards Night‘ Kennedy Surveying were recognised for the application of new technologies for problem solving critical infrastructure hazards on the NSW pacific highway. Using laser scanning technology Kennedy Surveying successfully implemented a three dimensional monitoring solution for rock stability in the Cudgen Tunnel that monitored every square centimetre of the tunnel rock surface.

The second award received at the 2016 EISSI awards night was for Kennedy Surveying’s Bowraville Off-River Storage Project which aided the construction of a large reservoir to protect the Bowraville Shire from periods of drought. Kennedy Surveying utilised Unmanned Aerial Vehicle surveying technology to periodically map, monitor and model environmental changes to the site. 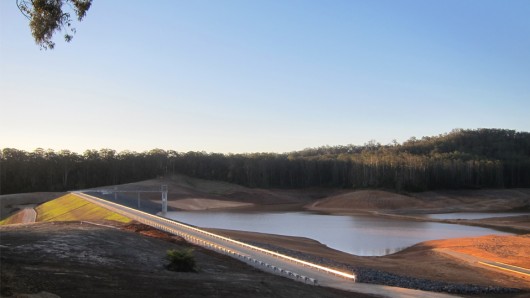 Following the success at the EISSI awards, Kennedy Surveying were further recognised outside of Australia and picked up the ASIA PACIFIC spatial excellence award.

2016 has honored Kennedy Surveying with several prestigious industrial awards that has cemented the company’s reputation as a professional and capable consultancy.

for best overall project is awarded to the best project out of all categories at the NSW Awards for Excellence in Surveying and Spatial Information. Kennedy Surveying was announced the award recipient for our long running association with the Broadwater Biomass Cogeneration Plant project culminating 8 years of survey assistance in design, development and construction.

Kennedy Surveying received first place at  the 2008 NSW Awards for Excellence in Surveying and Spatial Information. The entry was based on their association with the Broadwater Biomass Cogeneration Plant. 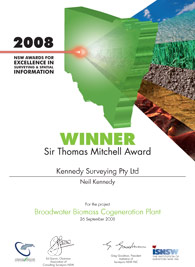 Kennedy Surveying is a strong advocate of community business cohesion and local business professionalism. Director Neil Kennedy has extensive involvement in local business and charitable activities and was awarded the Lennox Head Chamber of Commerce Professional Services Award in 2008 and 2013.

Kennedy Surveying is a member of the following professional associations :